The King's Crown crafted in solid gold with diamonds. A crown necklace to exhibit one's royal highness. Dating back to mythical kingdoms and days of ruling monarchies, there was one man who all of his empire during his era. That man was the Royal King. The Royal King ruled his kingdom to dictate order for the better of his family, his land and the people. He was one who many looked up to for leadership and difficulties during times of war, and it was the King's duty to guide his people in the best direction. Here is our Royal King's Crown necklace crafted into a gold diamond crown necklace. Our Royal diamond crown necklace is hand detailed to a lustrous finish. Your kingdom awaits, claim your crown and be entitled to true power with this gold crown necklace. A matching chain is included. Total diamond weight approximately 0.30 carat. Total height approximately 0.65" tall. Nano sized.

Our jewelry is crafted with the highest quality of material, aesthetic and craftsmanship available in the industry. We use the finest natural materials available to ensure longevity and beauty for generations to come. Every piece is branded with our Hallmark IF logo to represent true standards in quality and aesthetics.

The presentation can be as important as the gift! All jewelry from IF & Co. comes beautifully placed in our signature gift packaging. Your order will be delivered ready-to-gift to family, friend or a loved one.

All orders are shipped via FedEx. Full insurance is included with every shipment. Signature confirmation will be required upon delivery for the most secure delivery to you.

Considering the nature of our handcrafted jewelry pieces, we still offer a 10 day period on returns. Please fully review and understand our Returns Policy before placing your order.

Have a question about this item? Call us to get in touch with a team member who can assist.

We are available to assist 7 days a week: 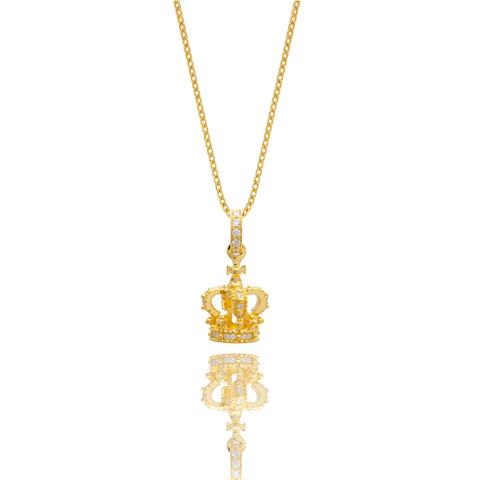 Purchased Crown with the ball chain. Everything was up to standard. Packaging was A+. Diamonds bling & Gold shines, good job team.

The guys over here are awesome and very nice people to work with!! Helped me out big time! Piece came to me very quickly and was in a very box with nice presentation! Kinda wish the necklace was a little thicker but that's ok I have a different necklace I'll be putting the charm on!! Keep up the great work!!