I’m so busy with wedding planning that I missed a great event last night! damn!!!
Snoop Dogg and Mike Tyson battled it out on EA SPORTS “Fight Night Round 4” on Xbox 360 last night in Hollywood. After Tyson lost the game to Snoop Dogg in four-round head-to-head match, he presented Snoop Dogg’s Youth Football League with a $5,000 check.

Tyson attended the event with his youngest daughter and new wife, and Snoop’s son was also in attendance. Onlookers for the virtual match-up also included Jerry Ferrara from “Entourage” Larenz Tate from “Rescue Me” and Wood Harris from “The Wire.” Attendees also had a chance to experience “Fight Night Round 4,” which players can enjoy at home or with friends on Xbox LIVE. The game launches June 25.

here’s some pics!
Snoop Dogg steps into the ring with EA SPORTS “Fight Night Round 4” on Xbox 360 at the House of Blues in Los Angeles Monday night. The event benefitted Snoop Dogg’s Youth Football League. 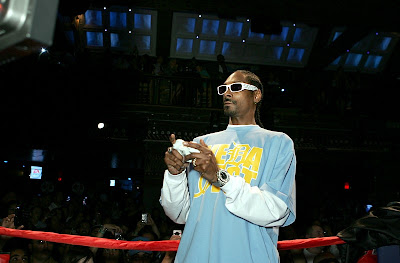 Iron Mike Tyson takes a virtual punch on EA SPORTS “Fight Night Round 4” on Xbox 360 at the House of Blues in Los Angeles Monday night. The game launches June 25. 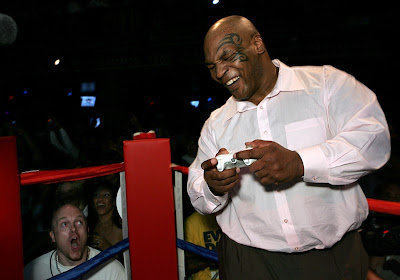 now had they really been squabing… it woulda took about 16 seconds with even a slight left hand jab by iron mike and snoopy would be at cedars sinai right now. lol…

shout outs to my homey’s who went! Estevan, Mister Cartoon, YaBoy… my boy Marco for hookin up the VIP and christina woody! thanks and sorry I couldn’t make it, but I’m def in for the next event! always appreciate y’all!