first off, it’s amazing that I am even up this early! because we didn’t get to bed til around 5am. anyways, you know I’m like dan rather or even geraldo riviera! I’ll get you the damn story/blog! lol.
I live literally less than 4 miles from the Roosevelt hotel and it took me an hour to get there! I even cut through traffic crazy, it was literally when we hit Hollyweird (btw, I remember going out on Halloween for the past decade easily, but IT’S NEVER BEEN THIS CRAZY ON THE STREETS!) it just got insane. we were stuck on 1 street literally 2 blocks away for about a good 40 minutes! anyways, throughout the mayhem and me trying to tip the hotel valet $100… DENIED! had to park a block away and the dude was super cool.! he hooked us up and we started to walk to the entrance. It was bedlam at the door. I’m trying to pull whatever strings so that I don’t look like an asshole, but you know I don’t wait in lines… I feel so bad because one of my homey’s got caught up and maybe stuck at the door. I hope you got in fam. I tried but I was on 1 last night…. matter of fact, I was on 2. lol.
so after the whole trying to get a bracelet craze. btw fuck you Cameron and your king zamunda homey’s. I was on a mission! to find our homey’s/our table, BUT most importantly A DRINK FOR ME
Masha, I’m soooooo fucking disappointed in you! I’m very proud you had a private room, but damn!
so anyways, moving forward, IT WAS A MESS INSIDE. there were 3 areas you could goto, the outdoor pool(of course best option when you’re wearing a mask that is 100000 degrees) upstairs(not poppin) or the auditorium(I guess Marilyn Manson or whatever was in there, we didn’t even bother to go in there. it was just too hectic.) I mean, they invited waaaaaay too many people. I hit the bar and I HAVE NEVER EVER EVER IN THE 16 YEARS OF GOING OUT IN HOLLYWOOD SEEN A MORE RIDICULOUS LINE FOR DRINKS AT A BAR! After fighting my way in, my boy Jay is like 6’8″ and pulls me through and everyone around me can co-sign how crazy it was to fight to the front. I almost had an anxiety attack and never experienced that before. So anyways, I get to the front with the help of Jay and I say, “I need 2 patron sprites, I’ll pay you $100!” and as soon as I said that, 10 other people yelled the same with benjamins in hand! lool. I got my 2 drinks I start looking for my friends. jesus christ, our group/homeys/table is literally 4 feet from where I was just at! I say, I just paid $100 for 2 drinks, they’re like you’re dumb, we got 2 bottles coming. lol. DON’T MATTER, those patron sprites were like water to a castaway! and the bottle service took forever to get there! so anyways, after taking some pics and peeping out the scenery (btw, I love to people watch, especially on a crazy night like this) I think we were all just self obsessed with our own group and kept it tight, which is great. MOST EVERY SINGLE PERSON who goes out in hollywood is so concerned about seeing who’s there instead of paying attention on who you’re with. After a few drinks I didn’t care about if Osama Bin Laden was there, we were there and we had fun just doin our own thing. I NEVER MINGLE OUTSIDE MY IMMEDIATE CIRCLE OF FRIENDS UNLESS I HAVE TO, but honestly, the homey’s are super cool. Alan, jesus bro, do you take 5htp? or serotonin pills? you are always so damn happy! it’s awesome and Jax, girl, you brighten up shit 24/8! Of course shout out to my homey Hiesm who was getting the 3rd degree from his girl LMAO! moving forward. someone finally dove into the pool and started swimming…. honestly, TIME FLEW BY. I don’t think I heard Mix Master Mike spin, but my man EdSki was HOLDING IT DOWN EARLY! every other dj kinda sucked. overall I had fun, but 1. the roosevelt was sooo under staffed! 2. there was 2 bathrooms with 2 stalls? wtf? I almost pissed myself! and THANK GOD I DROVE! there was a shortage of cabs, so we were almost headed to another party that went til 5am or so, but it was already 3am…. so I was just cruising the streets of LA/Hollywood peeping out all the outrageous costumes and headed home to just chill….. Bossa Nova? Kate Mantalini’s, 247 cafe? HELL NO! went home and drank some more patron, made some spam, rice and seaweed and kept it ghetto korean cuisine! haha. oh and add ketchup & sriracha to that spam and rice and you couldn’t tell us Mastro’s tasted better! the itunes was pumpin jams and had my own party at the tilt.
enough blabbing, here’s the pics (p.s. jax, don’t think I forgot about the grey goose jax move! lol! don’t try to get my baby in trouble! hahahahahaha) OK PICS! 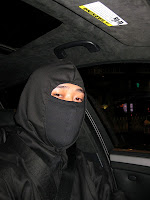 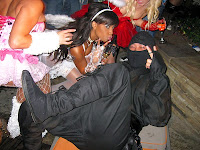 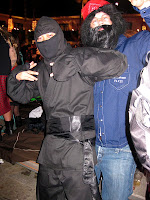 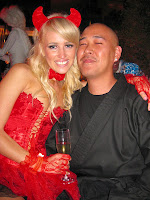 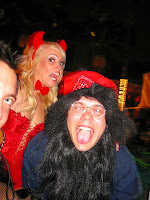 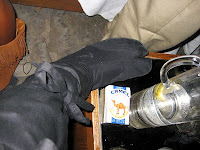