I wish last night was a bad dream with the Lakers…. fuck, why do we play so soft? and even when we play so bad, the other teams are within close reach of losing their leads… could you imagine if we really turned on the killer instinct? 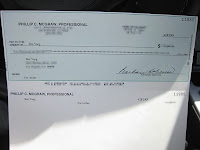 anyways, just finishing up this G-Shock for Dr. Phil’s wife, we already finished 1 for him…. this weekend was very chill and much needed rest was got. I spent over 20 hours over 3 days watching Desperate Housewives (lol, slap me please) and introduced my family and most importantly my Mom to my gf…. While I was out grinding Saturday, she was out grinding too…. got home and ordered that Pacquiao Fight while Jonas and my crew were all in vegas getting into trouble… I was making money betting stacks on the pinoy brawler! btw, today is payday with the bookey

So I get a call from 1 of my favorite rappers…. someone who’s stayed relevant for the past decade from a youngin in the game to a solid player in the game… I won’t say his name(pause) until I get the 1st step of the piece finished… it’s taken a few months to get the artwork and design to his likings…. he’s pickier than Mariah Carey! but this is a big job and he’s a previous customer, so with the album coming sooner than later, it’s only right we do him justice with the official IFandCo piece.

Envy Expo is coming soon, DON’T SLEEP! shit’s gonna be real major, real active this year!
Just did an interview for the Wall Street Journal, should be interesting…
I should pics soon of my new collab watch with Dunamis
the Reality TV Show is on full pause until the network gets it together and the main Star _ _ _ _ _ _ _ _ _ _ _ gets their mind right

“it’s all good, I’m goin off like lights when the show’s over” Drizzy Drake….. btw, he’ll be in town during memorial day weekend and I’m bout to start a new chain for him and something else….

and MOST IMPORTANTLY…. I GOT AN INTRO TO MY NEXT MOVIE…. I think I may direct this bitch myself! but I’m going to continue writing every night!