when it comes to tattoo’s, I’ve been very picky about who does them in the past 15 years…. before that, I had a very few tattoos that were amateur work done and it shows! so anyways, some of my ink was done by the following artists: mark mahoney, tom tilden and freddy negrete (all legends, literally gods in the tattoo world) BUT…
the reigning king is my big homey, big brother/mentor Mister Cartoon. I don’t get a chance to sit in the chair often with my dude, we usually get food, talk about life and business and shoes, lifestyle, cars, everything but tattoos…. so tonight, I hit the infamous soul assassins studios aka Skid Row’s finest cuz I had an appt to get part 1 of about 6 total sessions to finish my back piece. back pieces are serious business. it’s not just sit through 1 long session and get it done, but more of a time line and story of a persons life sometimes and much more. to me, it’s about the city of angels where I was born and raised and it will reflect my 36 years through a mural and when its all said and done, I can day, I have my back fully done by the internationally known Mister Cartoon. my arms and stuff have been done by him, but they’re mixed with the other greats mentioned above. Anyways, part 1 was to shade in and get the old Los Angeles block letters to have that real bold feel that toon’s does best! I was in the chair from 7pm to 10pm and most tattoo artists woulda taken at least 6 hours or more to do this much work. we even stopped for 30 minutes for some japanese take out. 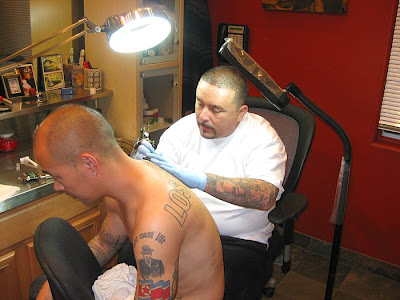 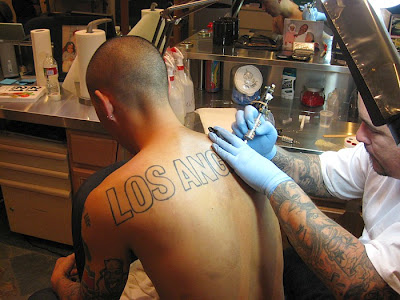 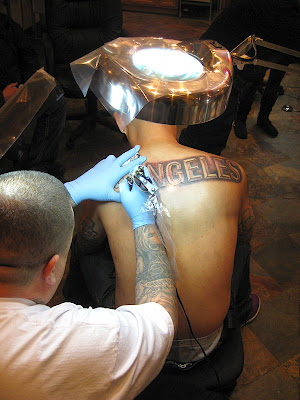 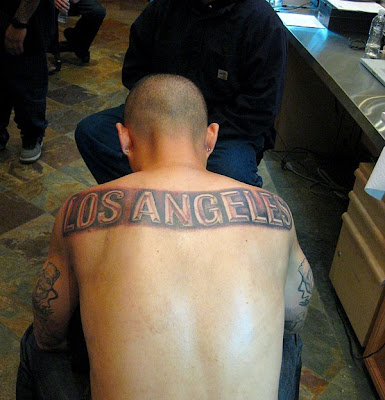 wait til you see what’s next…. the whole process it going to be crazy when it’s done! and I’ll have better pics of this tattoo in a week or so when it’s fully healed. nobody’s tattoo’s heal faster then cartoons. no joke.

p.s. All Star was not all that. I’m not there for the games, etc… I’m there to get paid to make appearances and slang ice and be out. I got my workout in today and went hard…. and I haven’t even packed for magic or even cut my wig, shaved, etc…. so who knows. I’m exhausted.
right now it’s 60%/40% if I goto vegas.