So as soon as me and franchise touched down to LAX from Houston, we literally rushed to the airport valet and hit westwood for some quick grub…. I slept like a champion on the plane and was rushing to get to the show because my lil homey Wale was the opening act….
The security guard standing right in front of us told me nobody was allowed to take pics or video for this event and since we were literally sitting on the 1st row of the balcony, this punk ass event staff dude was there for the entire part of Wale’s performance! 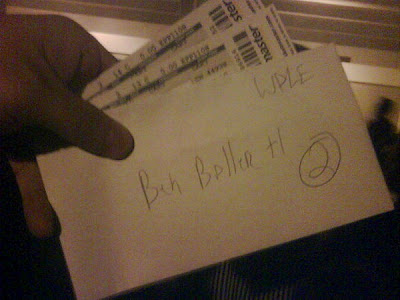 thank you Wale for the great seats! (sat to the side, just above stage level and what a fucking view! aisle seats too were piff!) 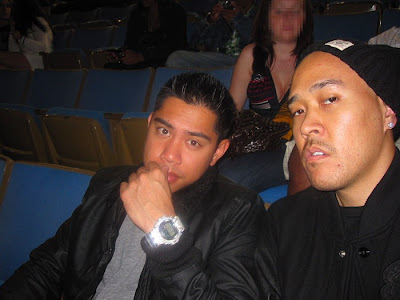 me and catdicc jr there at 7:30 sharp for Wale’s performance…

Now this is the crazy thing, I had a fucking wild ass weekend with Drake and my lil Homey Franchise who doesn’t get to experience all the shit I see so I wanted him to have a good time and most importantly an experience to remember for real…. Francis has never ever seen Jay-Z in concert ever and he’s one of his favorite artists period…. now I have been on tour with Hova, was part of signing him to his 1st record deal and seen his show over 40x…. so I didn’t care too much other than seeing some pretty girls who I knew would be in attendance there. But I wanted to most importantly show Wale some love and support. HIS ALBUM DROPS 2MORO! GO COP ATTENTION DEFICIT! DON’T SLEEP!
Now Wale had great energy, I love how positive my lil bro’s spirit is on stage and he’s part of this new movement that hip hop needs! I’m pissed I really couldn’t get to take pics… He came out with Nike Boots and of course ended his show with Chillin’ and ran around the entire audience and that was a good look for his fans…

next up was NERD. I’m not a fan of their shows, only song I love by them is Run to the Sun…. but Chad is my boy, always will be, but P? not so much…. they had a real unorthodox no label steez type set and I was bored…. but the ladies love P so you know after a little while they had the audience open/hyped etc…. there’s a reason why NERD never really sold any records, but they can always tour….. they’re most hyped shit on stage was songs they produced like Beautiful or Drop it like it’s hot (both snoop smash singles) and they brought up Lupe Fiasco to do a couple songs with…. it was aite, nothing special. 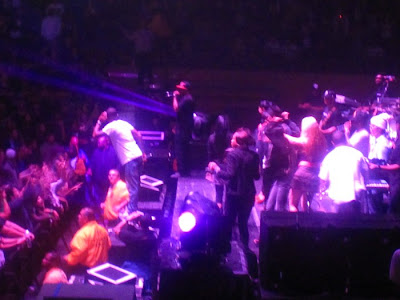 P brought girls on the stage (he always does that, I’m not mad lol) 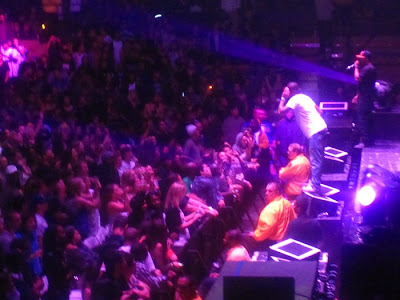 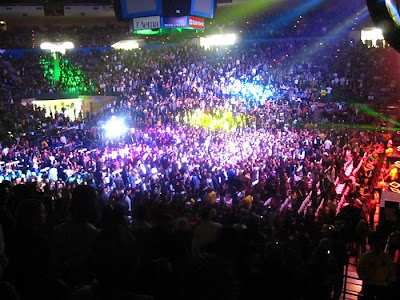 and as they were almost done with their set, this is what the audience looked like, finally a packed house, early… around 8:45pm 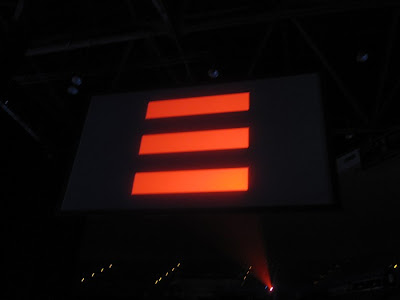 after NERD got off stage, the blueprint 3 logo went up… 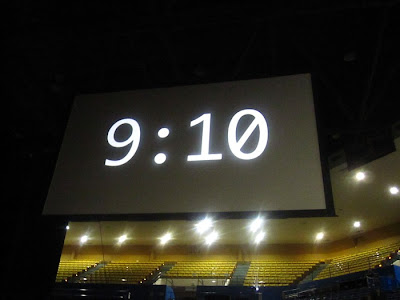 Jigga put up a timer with 10 minutes before showtime to get the crowd hyped!
he also threw on beastie boys NO sleep til Brooklyn which was cool…. 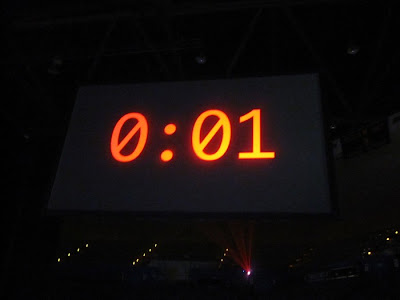 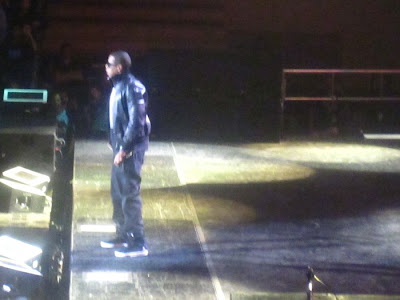 BANG, THIS IS ANTI AUTO-TUNE, DEATH OF THE RINGTONE…. 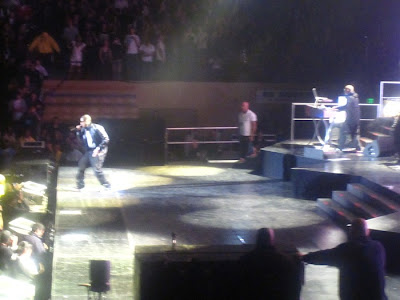 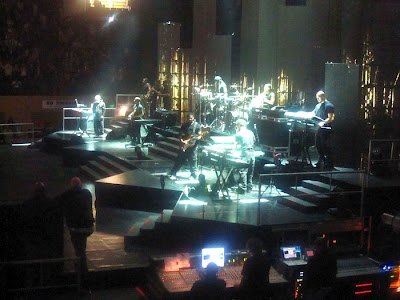 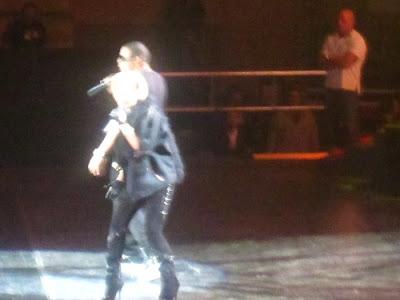 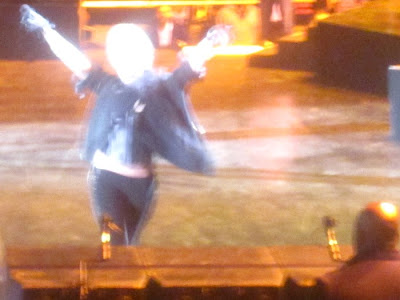 Ri Ri and Jigga “runnin this town” Jay showed LA a lot of shout out love…. 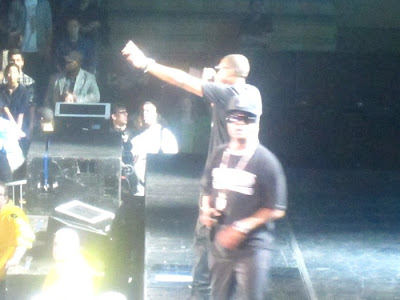 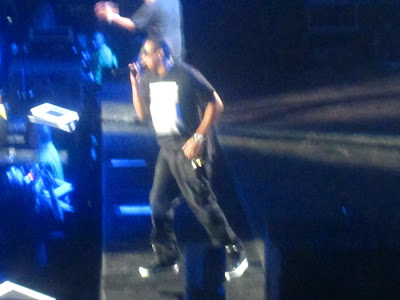 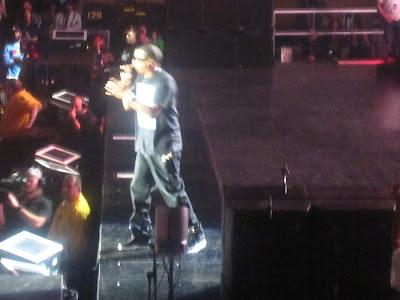 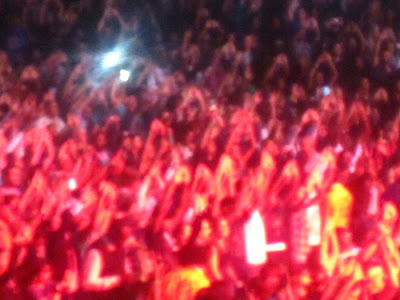 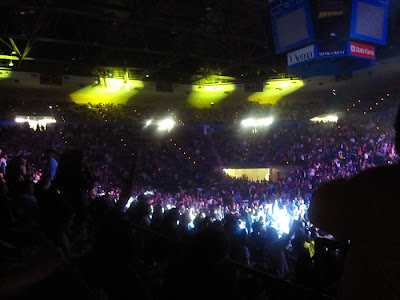 VIEW FROM MY WALK FROM THE BATHROOM… PLACE WAS NUTSO! 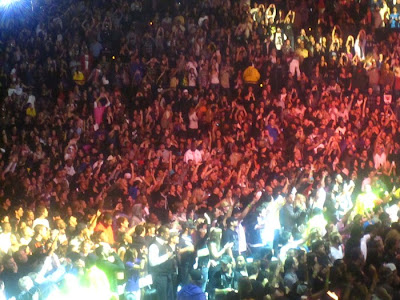 VIEW OF THE AUDIENCE AFTER “DIRT OF MY SHOULDERS”

AGAIN, THANK YOU WALE, FOR THE LOVE TO IF AND CO AND THE TICKETS…
(I saw Wale on backstage and texted him to look up and he did and ran up to my seats to give me a pound and it was dope to see the fans attack him…. I appreciate you showing love homey)

HERE’S 2 VIDEOS FROM THE NIGHT OF JAY-Z

GO BUY THAT WALE ALBUM TOMORROW!!!!!!
ATTENTION DEFICIT!
COP IT ON ITUNES IF YOU CAN’T MAKE IT TO THE STORE! SUPPORT GOOD HIP HOP!