So I met someone who stimulates my mind and keeps me intrigued on a regular…. crazy because we both suffer from severe ADD. did you cop that Wale album yet? also my homey Kid Sister, cop that! Anyways I’ve been having a lot of fun with this person, had a cool, but fun weekend!

anyways, My lil homey Jimmy Boi rolled into town and is about to make a South to West move for real! I picked him up from the airport to talk about this future collab on a mixtape we’re gonna do and chop up some real shit on this Asian Bros movement…. he’s younger than me by almost 10 years so he got a chance for real and I’m gonna introduce him to who I can and hopefully my man will make some chess moves real swiftly! I kept it light Friday night….. I just had my living room renovated slightly to make it look MUCH BETTER! (thank you Dennis). 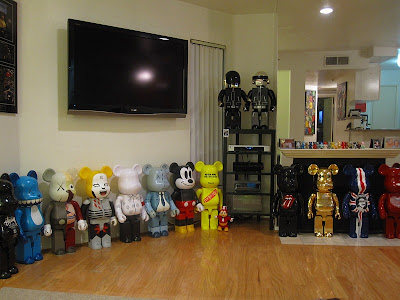 such a big difference already and more spacious! I’ll post more pics as things get cleaned up!

So I’ve just been blueprinting out what I want done next and I gotta paint the hallway, do recessed lighting in the living room + master bedroom, then do this funky ass wallpaper I been wanting to do that my homey Kim has in her crib for my 2nd bathroom…. finish the surround sound in the living room and master bedroom, then replacing the sinks again, shower doors in both bathrooms….. and lastly a new fridge(subzero gotta do it)….

Went to bed late as hell, Woke up with a million things to do, but pushed them off, but it was Saturday, so I ran some errands, stopped by Platinum to figure out what I’m gonna do with my 7, my M5 is gone in a week…. in 2 months, I’ll have 1 car for the 1st time in a very long time (excluding my old school)
Saturday night we began to get it in, but was going to a bullshit ass party that was ran by clowns who don’t know what time it is… you can’t buy game, but you also don’t turn down paper in this economy… real talk, not on some snob shit, but I walked up to a club that I haven’t been to in over 5 years and my boy had it set up, but this guy didn’t hear my boy clearly and he said, naw your friend can’t walk in here without a collared shirt. I said you dumb fuck, we got a table, we’re buying bottles, who in there is spending money? 4 minutes later, he was like do you guys want to come in? I said fuck no, fuck you and kept it pushing…. we rolled up to Playhouse and it was cracccccccckkkkkkkkkkkkkkkinnnnnnng. but remember, I hate going to clubs, but it was Jimmy’s last night to have some fun. I got to introduce Jimmy to some good people, he wanted to meet some celebs, so I introduced him to a few that were there, we got up on stage and since there weren’t any tables left, we got bottle service on the stage, fuck it… had some fun, ate some food. but my biggest mistake was 1 drink, then 2 drinks, then 4 drinks…. had to eat to sober up. got home safe at 3:30am after droppin Jimmy off at the airport but had to be up at 9am! 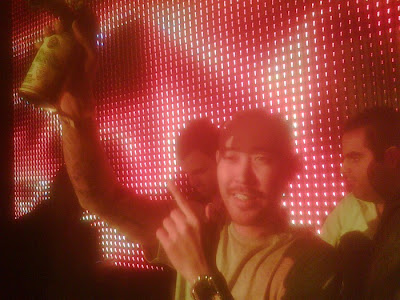 me actin a damn fool on stage with the air horn!

so why did I have to be up early? because my chitown homey Kid Sister was flying into LA JUST TO GET HER NAILS DONE! (true story) LOLOLOL…. best part about it, is her nail shop is in K-TOWN!!! AND LADIES HER NAIL SHOP IS ALL THAT! SUPER PIFFF! so we had a brunch… talked bout all the above and I always have a great time with Kid Sis…. she has the best energy and doesn’t take herself to seriously, she lets shit hang out and keeps it funky for the ’99(inside joke)…..
sooooo right after all that, I had to run down to almost the glendale area for a very important ceremony…. 1 of my closest friends Johnny was getting his daughter baptized and I was gonna be a God Father! god bless her Johnny, she’s so precious for real! And I wouldn’t have missed it for the world! 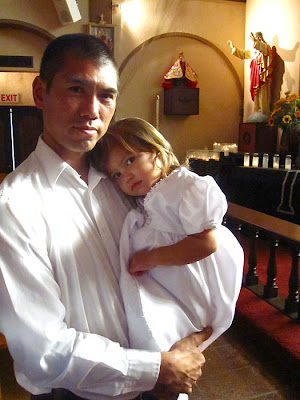 Johnny and my god daughter Amara 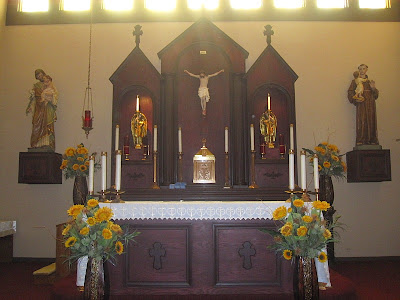 I may not be the most religious man on the earth, but I love churches, I think they are such beautiful peaceful places… 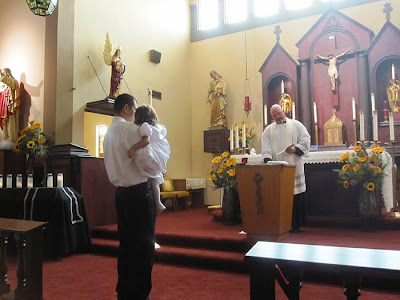 the ceremony…. shes so damn cute!

I still haven’t got any rest and I need to because my ass got major grinding going on!
BUT YO! THE MCRIB IS BACK! I HAD ONE LAST NIGHT THANKS FOR THE HEADS UP FROM MY BOY ERIC CUBEECHEE! shit was kinda delicious, hadn’t had one in almost 10 years!