Just wanted to shout out my brother (with more research we might actually be related which is a fucking trip!) and if you don’t know him… then peep a little about him here: JOE HAHN
He’s in a small band that you may have heard of that only sold about 20 million records worldwide in the past decade…. anyways, he let me come thru and chill at the compound yesterday to vent out a little and relax and just talk shit. I appreciate it bro. You have a fucking outstanding house!!! (gott damn man, gotta sell my gold, my crib and step shit up because property is going for cheap!)

Joe has just so much shit art wise in his crib, it’s too much to take pics… from RoStarr to Banksy to Murakami to David Choe to so many crazy things… congrats and god bless you for your words of korean wisdom.

I will be showcasing and selling our diamond g-shock’s at Joe’s store called SURU on melrose very soon…. so be on the look out. and he had so many crazy sculptures/art pieces that were sick, but this crucifix/rifle was too ill 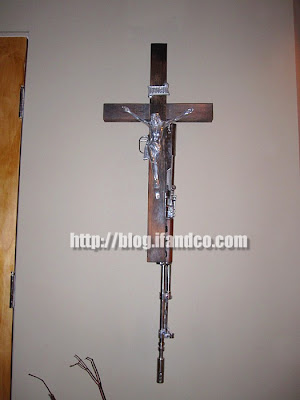