so yesterday and last night it was strictly family. la cosa nostra
(G Platinum you know we goin dumb with karim and everyone at Playhouse tonight!)

woke up to these from my mom….. every year she always sends me flowers:

so I had a great lunch in k-town yesterday with my mom…. and
I got a VERY special treat….. I’ve been a lakers fan legitimately since I was 7 years old, so 30 years in the game I’ve been watching them play…. sat on the floor with jack countless times, slapped hands with my fam Shaq, Kobe, Anthony Peeler, magic johnson, smush parker and a few cats I grew up with like Jason Kidd while sitting court side….
so yesterday I got to wear history. remember I’m not a hater so I got to give props where props are due… my homey Jason of BH let me rock an official Championship Ring which was sanctioned by him by the Los Angeles Lakers organization… shit is heavy as a mugg! thank you Jason, always much love, the hate on hate against other jewelers is crazy! Anyways, I just wanted to see the ring in person and Jason let me hold it, showing love from 1 jeweler to another and 1 Laker fan to another.

I rocked the ring for the entire lunch…. and it’s so funny cuz my LAKE SHOW got in that ass last night!

so when I finished lunch… this was waiting for me at my office! 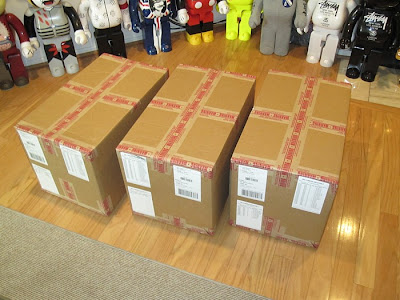 yep a shit load of gear… 2010 Spring 1 of L-R-G to be exact… thanks Jonas… and I appreciate you Jesse for always puttin in mad work!

Some things just don’t change… I’m a creature of habit, so koreatown is my stomping grounds and the place I’ve had over 15 bday dinners at in the last 16 years…. so one more time…. now that the new official 5 star spot will be open to the public in a month… I’m sure i’ll have my b-day dinners there… but Cho San is still that piff…. in the history of my dinner’s this was officially the smallest group I’ve had. strictly fam and my closest friends. no disrespect to my homiez who weren’t invited, this was just something long overdue with a lot of shit goin on in my life…. btw, I never post pics of my moms… just cuz

to define these cats? TRUSTWORTHY!

my friend made this cake for me and honestly? it was the first cake a friend has ever made me. weird huh? well that shit was delicious, fuck the fancy shit, I like me a yellow cake with chocolate frosting. simple!

f.y.i. there weren’t any cherry’s on it, the waitresses did that… but whatever, we literally had 3 waitresses waiting on us and it fucking drove me nuts for a second, they wouldn’t let me just kick it…. or us just chill. but at least we had my favorite patio room….. homicide called them shits Cherry Tomatoes! but keep it real Creezy… you been to a lot of korean restaurants… can any of them fade this one? you sprung on the kalbi chim!

so after dinner and a long ass talk filled with a decade or more of stories and shit…. when I need inspiration or just want to be enlightened by light….. I head to see my mentor and big homey Mister Cartoon… he was in the middle of painting a crazy huge canvas for the side of a NYC hotel(they’re going to take his artwork and make it a 30 foot image by some other large number and put it on the side of the hotel).
I sat there and caught up with my homey, he always has funny ass stories and gifts and there’s always millions of things to look at down at the studio. People only see Mister Cartoon for the Tattoos like peeps can’t see past the jewels with me. anyways, thanks carnal. appreciate the love homey…. shout out to you too Sal.

toons takin a break before he got his grub on…. that motherfucker is a beast with the freestyle art. respect til infinity to the homey….

p.s. my car will be finally ready today! but my suspension doesn’t come in til tomorrow! fuck…. I’m still gonna kill the streets tonight and you know i’m gonna post pics!