man I been seein a lotta jibberish about my personal love life on blogs/forums being forwarded to me by friends, fans and lurkers, etc…. (Tila went out hunting for a sugar daddy, Tila’s doin this, Ben’s doin that…. the time and effort spent, even if it was 5 minutes? loser type shit, some things were lightweight funny, but some people are reaching too hard and to pathetic levels.
If you’re getting laid, you’re out having fun, you’re doing something positive with your life, you don’t have any jealousy or envy or hate in your heart, then you will overstand what I mean. I will be the 1st person to laugh at shit no matter how fucked up it is about myself. BUT nobody can clown me harder than I can. trust me….. My life is still a dream, I can choose to make it miserable or continue to make it greater.

FYI, I’m not dating Tila, she’s one of my best friends. I’m not dating anyone, I’m not even in that mode of chasing some snatch right now… I’m on a goal chase to make sure my cipher is secured and happy. I’m all about cleansing my seoul of bullshit. I had to change my phone # 3x this month alone and honestly it feels good because I would say close to 40,000 people(not a joke) had my # , but now if my phone rings, I know it’s definitely someone I want to talk to. It was about that time to detox from any negative bullshit. The last 5 days have been really good and honestly, for those who REALLY REALLY NEED TO REACH ME? like 911? I’m not that hard to get a hold of. You can call the store, or if there’s a will, there’s a way. If I don’t get back to you, it doesn’t mean I hate you, it means I just don’t feel like talking to you right now.

So anyways, I love how people DO NOT READ, but they love to look at pics and assume or misunderstand how I LIVE MY LIFE. I’m grown, I take full responsibility for my actions and I’ve never been afraid to admit blame. I live in a small condo, but in a nice neighborhood because I don’t need much and I used to have a 4 bedroom spot that was useless to me. I like having just enough space, BUT I love having nice cars, thats my thing; CARS! it’s been a passion of mine since I was a baby. I was a fan of the ferrari daytona and lotus espirit since the early james bond days in the 70’s…. thats just how I like to live. Now, I definitely chilled out REAL HARD after my b-day party(it was dumb to spend 20k in a night and it was all about graduating from that clublife, going out with a bang and acknowledging that I’m over that shit and it’s out of my system). I cut down spending on BS and slowed down this year especially after the baby news and I’m not mad at all. how could I be? I’m endorsed by the illest clothing brand that drapes me from hats, shirts, tees, jackets, pants, denim, underwear and socks, etc! I’m also endorsed by the illest sneaker brand and I get checks…. and I still like to eat well whenever I want to.

NOW!!!!!!!!!!! peep game:
this is what is fucking funny to me. I never faked anyone out(not no girl, nobody) about my lifestyle and had anyone think I was perpetrating a fraud or fronting about unattainable amounts of cheese. (in fact for those who know me, may say I actually downplay it) I’m definitely NOT broke, but you know who is? ……. deezzzzzaaammm! wow! MAN how are you gonna ask your hyung for a loan for $10k you shipsekki? for an apt? and say it’s for your moms business, her small little cafe? don’t play dumb, it’s toooo late in the day for that. real talk. Lying and telling girls you got a trust fund? smfh. You pushing an old lexus IS/GS? Now, there’s nothing wrong with that, but you portray and project a totally different image…. just saying, my boy’s dad owns Dreamworks and pushes a prius, I’m very proud of those who do that(sarcasm), good for them but us koreans are NOT THE MOST HUMBLE PEOPLE. There ain’t a person on earth who has called me out on some chips and didn’t get taken for the pot. I keeps it 1000 for peeps. It’s like a deeper and deeper hole this person keeps digging. I’m telling you, leave well enough alone. Life ain’t about money, it definitely brings security in ways and convenience for sure, but I’ve said this thousands of times, I’ve been rich and depressed.
I’ve said all I can say…. in fact, I’ve said more than I can say. JESUS.

p.s. if you wasn’t really bumpin hip hop heavy in the super early 90’s you won’t get the meaning of the title of this blog, but you can google it and still not understand what it meant then….

anyways, when I need to seek for inspiration or motivation, there is 1 place for that guaranteed and it’s at Soul Assassin’s studios… between the ultimate level of grind and knowledge and spirituality spread out that spot, my mentor Mister Cartoon and my Big Homey Estevan really keep it gully with me. They’ve guided me through tough times, good times and real life situations… So it’s a good place to be. No lazy shit or kicking back going on there ever. Maybe some jokes, but it’s business 24/7 there. I went down there today to chop it up with my big homey’s, handle some business and grab a mister cartoon edition Metro PCS phone….. but as much and as many pictures as I’ve shown on my myspace, facebook, here on the blog; it’s funny how the 2 posters that are my favorite in the whole gigantic studio(close to the size of a small shopping mall, not strip mall, but MALL MALL) I’ve never shot these posters before… so I wanted to put them up.

(there is so much artwork and amazing photography, so no disrespect to my big homeys Cartoon or Estevan) biggie’s wanted poster…. damn I was with Biggie and lil cease a week before and the night of his death… crazy… 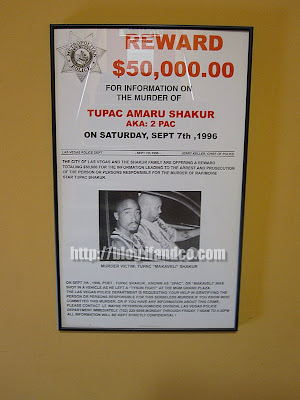 but this shit is crazy to me, Estevan you ever wanna sell this, holla…
I miss you Pac, not cuz you were a fucking living legend, but because you treated me like a VIP when I was just a young dj trying to make moves. I remember how you treated all your patnas, roll 11 dudes deep to a club and make sure everyone got ladies, paid for everyone when we didn’t have the ends… I can’t believe I had a meeting with you about some real important business the day you died (supposed to be on the set of Gang Related) RIP homey… 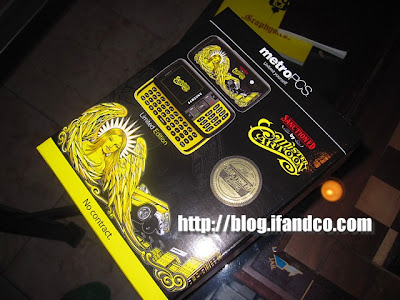 a shot of my new mister cartoon sanctioned PCS joint… I promise not to talk bad on it! lol. no throw away homey!

thank you everyone at SA studios, nate, hunter, sal, marco, skanless, toons, flaco and I miss you Kei san!

peace! I can’t wait for 2moro…. it’s gonna be a fun day with my lil mama