first off, WOW, like goosebumps WOW!
I didn’t know what to expect, but damn, this was raw ass footage for real! It was really the man behind the man and it covered so much of this upcoming sold out tour of MJ’s and it was crazy. I’ve met the man, the myth the legend before, but this movie really would shut up anyone who had any preconceived notions about Mike. It really shows how professional he was and how amazing his whole stage presence to and how a life long career molded him into the greatest pop star and singer of all time. I mean some people are around music a lot and don’t understand the mechanics of how music is made, but MJ dissected this tour to the molecules… from the drums to steps to of course his lead dancers to stage sets… this was not just a production or normal tour. this was deeper than a broadway show or play. This shit would battle a cirque de soleil show. I mean with so many damn hits, I couldn’t imagine how exhausting an entire show would be for him…. and at 50 years of age, my dude was still busting moves so fluid and so G I was amazed!
There was a particular part of the movie where they threw him into an old bogart film and the CGI is so amazing these days, this shit was movie inside another movie inside a huge show and then the part where he was singing “the way you make me feel”and how he started out raw acapella and then orchestrated how he wanted to project this song on stage (he did that with everything) but it was just some next shit…. His commands were said so soft and gently, but demanded the utmost respect! It was insane how much power he had over this and not that he abused it, MJ knew exactly what he wanted out of this tour. I’m so sad he’s gone and nobody will be able to see the tour.

1 thing that had my heart drop and stop everything was around the middle of the movie, where the dancers are wearing sorta swat team outfits… MJ is wearing a white tee and a blazer and on hte white tee Michael Jackson aka the greatest of all time, aka the King of Pop was sporting a custom made diamond broach made by yours truly and the ICEE FRESH family. I can’t explain what that meant to me……

go see the movie,
for me, growing up and actually going to the store to buy Off the Wall and buying “thriller” on record and tape when it first dropped made this experience a little different due to my age. I was very impressed. The film continuity wise was superb and it was edited amazingly from a few different angles….. that’s all I need to say

on a side note, every time you go to a dinner and a movie and valet at the grove, it runs you around $200 for 2 people. ridiculous… these sodas are almost 40oz each! so unnecessary but with a deal package it was the same price as if we got small sodas wtf? 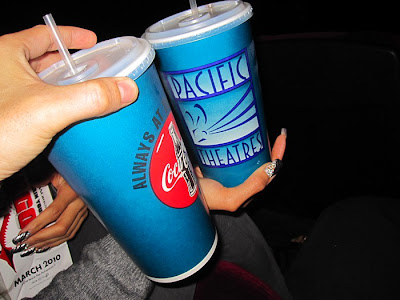