how about my first korean concert ever?? well, okay, first off, thank you to JYP entertainment and my dong saeng Harry Kim who hooked up the VIP services. yesterday was a blur for real. twitter literally set my day back 2 hours and I was running crazy after that. had to ship out a watch, finish a piece for a canadien rapper

and run around town and be @ the shop of course. sooooooo
fast forward to 7:30pm… I’m on the 105hwy to the 605hwy and I get off and I start to pass norwalk and I know immediately koreans are near. once I hit the city of La Mirada it was a wrap. K-Town on the border of OC county for real. I hit the venue which is at an arena that looked like an old church or evangelist place. so I was nervous at first entering. My dad was also a minister @ a church growing up, so I was forced to go to church as child until I was 16 so I hated church with a passion and not the passion of christ. but thats a whole other story (fyi, my family is split up into jewish, buddhist and christian. lol) so I say to myself, If I see 1 person trying to pass me any information pamphlets or wearing a jesus tshirt, I’m outro asap. I call the vip host who brings me into the venue, then brings me backstage to meet the VP of JYP entertainment and meet the stars…. I don’t really know what to say, because 1, I’ve never heard of these people before in my life and 2, they only heard of me through their friends, internet, etc. I took a few pics with some kids outside who asked, but I got there a little late, so I’m glad I didn’t run into all the kids who are super internet savy. anyways, everyone was very nice and I just had to see the show to make the network and build and I know I can benefit these guys BIGTIME here in the states and I’m also building my blocks out in Korea for my visit to the motherland soon… 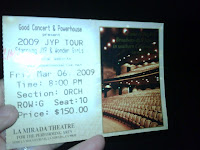 okay, so I sit down, 7 rows back and almost dead center and the seats are amazing. the place was packed and sold out and there were rows for day, and also it was 2 story’s (balcony). now remember, I’ve been goin to concerts since I was a youth. and it’s been a while since I’ve seen a crowd of people this LOUD! man koreans support their artists big time. so the opening act was this kid G-Soul. kid wasn’t that bad. thats all I’ll say, a little molding here and of course he’s with the right peeps, so a little push, he could do it. I can’t call it cuz korea is sooo different. overall, they’re late by a year, maybe 2. next up was a girl named J-Lim, she was aite, whatever, no hate, I hear girls who will never be heard doin back up singing for Dr. Dre in the studio who would eat her. 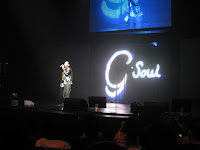 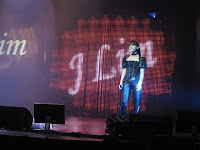 NOW PEEP THIS DISCLAIMER. I support my Korean heritage and culture, but understand, I’m at the forefront of this entertainment shit…. so I’m not that type of guy where my loyalty is based on being bogus. whether it be family or friends. I’m very loyal, but very true. sorry but if my mom said, ben 2 + 2 = 5, I’ll say, no it doesn’t and keep it moving, but that don’t mean I don’t love her or won’t stand by her side. feel me? okay, we’ll proceed.
the Wonder Girls are the equivilent to Destiny’s Child in Korea(except they’re all teenagers), they are killin it out there, good for them. they have a decent show and I’m not mad at them, but if thats what sells in korea? SHIIIIIEEEEEEEUT(in black dudes voice from 25th hour) I’ll be the next billionaire music mogul in Korea. on a 1 to 10 singing wise, the best girl in the group was a 7, on a 1 to 10 scale dancing wise, the best was maybe a 6.5, overall image, I’ll give them a 7.5 there was 1 girl in the group who could “get it” but I mean at the end of the day, she’s no Hyori Lee. btw, Wonder Girls are signed to JYP entertainment. 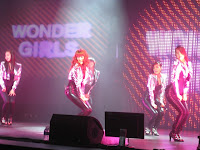 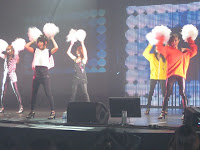 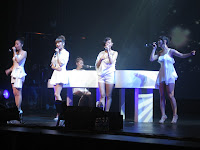 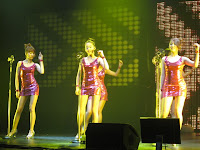 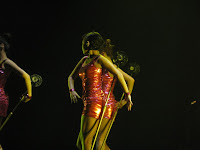 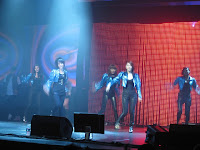 after them, there was a short movie/intermission for JYP’s intro and this group 2pm performed. they were the 23 year old b2k for real. yawn. but thats the style. they could dance a lil bit, no jabbawockee, but I don’t know. shit I should start building images for these groups. I remember when Jodeci would come out on stage…. denim suited up like inmates and kill shit in some doc martens! anyways…. 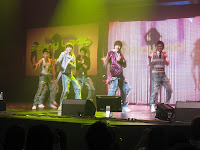 so the main event comes up. Mr. Jin Young Park (in korea he’s Park Jin Young) aka JYP and his resume is heavy. I won’t lie… dude produced 1 of the only gigantic stars in Korea I’ve ever heard of: RAIN. JYP is talented no doubt(producer, dancer, tv star, singer, CEO). He’s also maybe the only pop star I’ve ever seen thats uglier than me. lol. and I’m an ugly mofo, but this guy looked like contemporary art. He’s done a lot and dude is older than me. So he comes out on stage with the swagger of a 6′ 10″ MMA fighter with Justin Timberlake dance moves and corny come on lines. keep it funky? his singing skills? a solid 9, production skills? a 9 and dancing skills? a 7.5, but overall, he’s definitely an entertainer. he’d get NO play breezie wise if he entered the integrated circles, but koreans are different and HE OWNS HIS KOREAN DEMOGRAPHIC! he swagger jacked a lot from usher and JT, but I’m not mad and dude is killing it. the girls fucking loved his guy and I understand; his stage presence again was heavy. His Band was solid too…. I left with 20 minutes left in the show because I’m not into the crowds or such and I didn’t really want to mingle backstage or seem groupie-ish, so I shook the spot and headed to meet up with a friend.
(like I said, house was packed!) 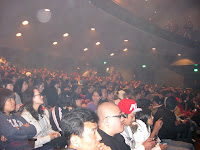 JYP entered the stage like Hov on some black album shit. lol. I ain’t mad @ dude. 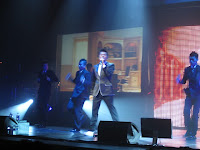 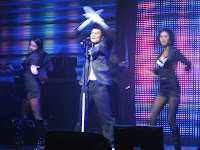 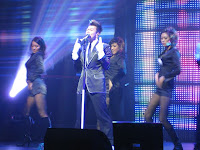 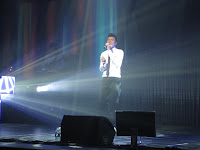 I had my own stereotypes also too which is shame on me… I thought I was gonna see vendors selling kim bop and shit and all types of crazy fob shit. overall everyone’s english was not nearly as bad as I thought it’d be and I actually understood their korean when they were talkin, just not when they were singing so fast… I did hear JYP say Mokoree(sp)? which means chain/necklace in korean. lol…. you know he needs some IF and CO in his life!
I know, I’m hella critical. but peep game. outta all this, this is my conclusion: I had a lotta laughs, I smiled, I was embarrassed a little, but man, I have a much bigger vision for the motherland now and I’m gonna go out there like a fucking bandit/hooligan. Their definition of dirty is still cleaner than a bar of soap guy with ripped jeans and tough guy clothing. I’mma thug it out on some next levels there. lol….. ohhhhhhhh boy! can’t wait. hahaha

some other pics, my lil homey’s Lisa & Eunice repped KPop for sheez! 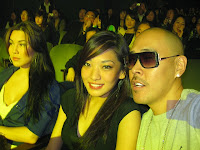 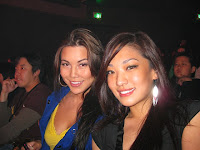 thanks again Harry. I’m really excited about traveling to Korea a few times this year.
thank you Woo and Hannah and JYP entertainment