shout out to my lil homiez who are now though officially OG’s…
forgive me if my shout out list is shortened…. but Scott Caan, Alchemist, Frek One (RIP), Bernard (RIP), Seth, Kairee, Ryan, AM, Robbie Rob, Nick B, Alex Lay Lay, Justin Burner(RIP), Faydoe aka Doug Matt Goldstein, so many more heads…

anyways, DJ AM aka Adam used to rap… and the other night I forgot to add the video footage that I had from when Alchemist played AM rapping…. well him and Homicide have the full copies and i’ll maybe upload them to my imeem account…. but meanwhile enjoy my brother spittin bars (this is VERY VERY OLD)
enjoy!

from chillin in an explorer in the early 90’s to producing for Nas, Mobb Deep and starring in Oceans 11 to Entourage etc…. 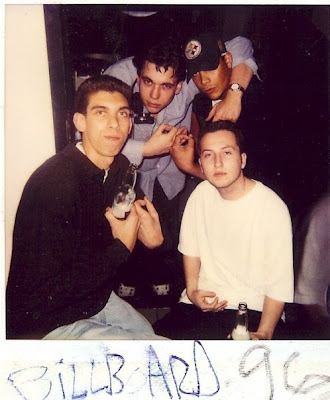 who woulda ever thought that cats woulda been in a famous platinum band? Crazy Town… owned a dope ass mens clothing store? Kingsbury… be the most famous dj on earth? AM! be a huge actor? Scott Caan…. be one of the most significant producers in hip hop? the Alchemist…. and it’s goes on…. everyone’s doin things. we ain’t kids no more, but we got memories to last 20 lifetimes.

anyways, 2000BEN continues… to all my doobie brother homeys, I’m sorry if I was too much of a dick back in the day…. that shit is the past and you know its nothing but love. that was my insecurity and ego. We all circling paper and circling life. god bless! shalom!