So this past weekend, me and the wife celebrated Labor Day weekend in Orlando, Florida and made special appearances as well as hosted a party @ Antigua Nightclub in downtown Orlando. the night we got to Orlando, we linked up with my lil bro JimmyBoi and I met 2 new comrades; Vinh and Tony….. man, they held us down out there for real. we sat down with the Orlando & L2H family for a quick dinner then hit Roxy Nightclub(btw, seen the fam fam LMFAO’s billboard for an appearance they’re making later this month) As soon as we got to our table, Jimmy & Vinh told the waitress, “you know the order, give us 10 rose’s and a few cold waters(water being grey goose) I was suprised they had rose’. AND it was moet & chandon nectar imperial rose’ which is fucking bomb… so we chilled out. got too drunk
my dude Jimmy pourin the Rose’…
I can’t front, he came up with a new drink!
his homey’s pulled out some purple drank and poured it into the Rose’ and called it “SLOW ZAY”
HAHHAHAHAHHAHAA, SHIT WAS KINDA EXTRA DELICIOUS THOUGH! 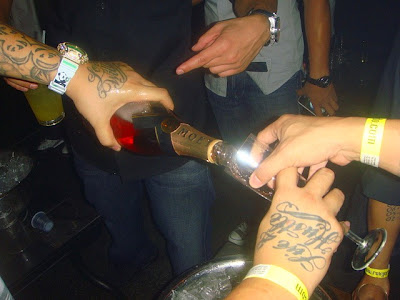 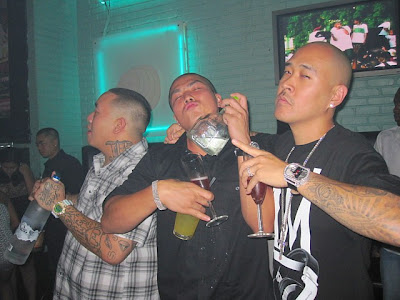 so the next day, we was hungover, didn’t go to bed til 6am and didn’t actually wake up til 6pm. stayed in a new hotel because we got kicked out of the other one…. ordered room service and got fresh for the our event @ antigua. DJ Chino from the local radio station was shouting us out and the entire deepvision.net crew and Reign Boutique along with the new homey Vinh held us down.
there are I’m sure a bunch of more pics, but the night was sort of a blur, I was honored to host my 1st asian party in Florida with y’all! 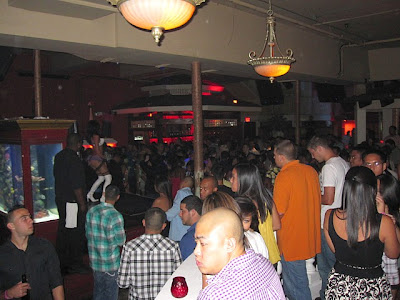 there was a line literally 200 people deep outside and it was packed then a muthafucka inside… as soon as we hit the stage, it was flashing cameras for 30 min straight….
Jimmy Boi was there for his mixtape tour and he was the main event/performer for the night and when he hit the stage, it was a done deal. the party was a success and as much fun as we had, we were lightweight homesick. the weather in Orlando was so damn humid! moist then a muthafucker! at nighttime like 3am it was hotter than anal sex with sriracha instead of ky! damn… I gotta shout out the homey Southstar (of smilez and southstar) who is extra cool! and Millz and the rest of the L2H fam…
BUT EXTRA BIG SHOUT OUT TO THE HOMEY VINH. my dude, you held us down like we had the same blood pumpin thru each others veins. For real. I got you.

p.s. shout out to Kadoma in H-Town, he got me on Houston TV/Radio for a show called Houston Sports Wrap and I did a dedication interview on behalf of AMC and DJ AM. nuff said