So it’s April 7th, 2009 and I’ve already been pulled over and harrassed by LAPD, Sheriffs & CHP. I do not have a criminal record. I do NOT have a single moving violation, I have NOT been pulled over 1nce this year for racing or speeding or things like that. They pull me over for saying I look “suspicious or the vehicle looks too suspiciously nice” basically saying I look like a dickhead. smh.
anyways. Today I got a fix it ticket for my exhaust system which violates the CA smog emissions laws and supposedly disturbing the peace(blasting Led Zepplin in my car on Crenshaw smh) I’ll get the DTP citation dismissed by my lawyer, but the hassle of goin to the CHP office to get the car inspected is so fucking gay. I am a tax paying citizen. I HAVE NOT HURT ANYONE! how lame are you guys? how bored are you guys? stop the guys who are killing and beating up their girls.
they called back up too? jesus… then asked me of course, what are you doing driving down crenshaw? lookin for all the cute light skinned teenage girls of course you pigs! wtf? it was a nice day out, so I decided to roll out and cruise the SHAW…. as I passed King blvd. the cops were sitting inside the parking lot of Krispy Kremes(of course they were) and heard me roll by at 8mph and pulled me over… this young latino cop was like “awww the infamous ben baller huh?” what the fuck else do I say…. 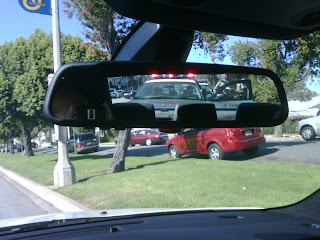