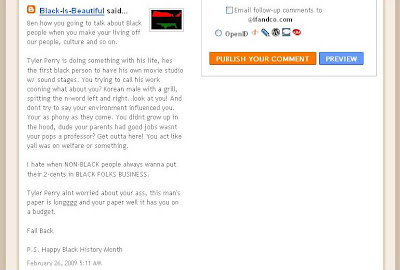 this was originally going to be a response to a comment I received, but it’s too long and my opinion should be read by 1-dimensional folks like this….
Black-Is-Beautiful,
thank you very much for your comment and visiting the blog. I’m sorry if I offended you in anyway, now let me begin by saying, what you don’t know about me could fill up the entire state of Texas. what I know about you? not so much, outside the fact you want to throw a shot behind a cpu screen and an alias username. so let me start off:
I was raised in the heart of koreatown; a place that gave birth to the largest gang on the earth: MS13, along with 9 other hoods just inside a small radius of a neighborhood. not until 7 years ago or less did it become a more than 50% asian populated area. Koreans owned business’s there, but didn’t live there, it was predominantly latino and blacks who lived in k-town since I was a toddler, that’s a fact. to this day, it’s not the best area to live in, although it’s cleaned up a lot, come by 6th street @ nighttime and see how many gangsters you see actin a fool. TOO MANY.

f.y.i. my pops was a professor @ UCLA for 30+ years…. he came to america to get his PHD and it took him over 20 years to pay off the loans and he NEVER had a salary over $30,000 a year. My parents were divorced when I was 11, so I grew up in the streets as a latch key kid…. btw I was brought up on Richard Pryor and Earth Wind and Fire, the Bar Kays, Soul Sonic Force, etc…. that was what was around me… but my older brother and sister were listening to new wave and punk rock, so I had a little of their influences too.

If I don’t like YOU, I don’t like you, color has NOTHING TO DO WITH IT. I’m an overly very descriptive person. If I hate that brown piece of shit, it’s a piece of shit and it happened to be brown. If I say, fuck that black honda accord. doesn’t mean, I hate all black cars or even all hondas, I just happen to not like that specific one I’m immediately talking about. same goes with people. ya dig?

I don’t know what else I want to say, so if something comes up, I’ll be back…. but sorry, had to get this off my chest.

p.s. not that it matters, just putting it out there, but I’ve traveled to over 30 countries in my life and interacted with sooooooo many different cultures. yes, I was influenced by the hip hop culture and at a very early age… but it does not define me.

much love, everyone, have a good day.