(BORAT VOICE)NNOTTTT!
so I get a call from my homey who manages some big time players in the music game…. I’m freshly engaged so not much is going to get me out of my house away from my fiance’, let alone out of town…. but I get a call from R. Kelly. keep it funky? I been a fan since his 1st album. I’m not a fan of very many artists out there. I’ve worked directly with Jay Z, Tupac(fan), Dr. Dre(fan) and Michael Jackson and the list goes on and on…. but I have never really directly fucked with Kellz before. Seen him a few times at events, but if you know anything about R. Kelly, he’s only been on maybe 2 or 3 flights in his entire life and he’s 42 years old. He only travels by tour bus followed by his convoy of a maybach and phantom…. ANYWAYS!!!! I’m a huge fan. R. Kelly got long super long paper… so I’m like aite, he is shooting a video in ATL? with OJ da Juiceman? shitttttt I’m in homey, no homo… let me know whats good, get me a room and flight and a cameo and I’mma close this shit early! so I get a text on sat that I’m confirmed for a trip to the A. Duty calls, but not only that, this is something I want for the resume and a new client for IFandCo.
So come late sunday night I get my itinerary and it’s supposed to be for a red eye monday and we shoot all day, all night tues, then fly home back wed morn…. ummm, my ticket says 12noon monday, so I’m like aite, fuck it, no big deal….. get to LAX, FLIGHT IS DELAYED 4 HOURS! so I call my homey to come back to get me so we can eat and roam around the marina to kill some time. I finally get back to the security check and a few heads shout me out (to this day it will always bug me out that cats know me at any given location) even at lunch and at the grocery store that day cats was like “oh shit, ben baller, k-town!” ….
anyways, I’m headed to the gate and I run into my boy Gorilla Zoe… he’s in LA to write some music and work and we chop it up for a while(of course about Jewelry) and then I head to the gate to find out that my aisle seat has been re-located and I see cats sleeping on the floor of the gate… I’m like hell naw, fuck this. I come out the pocket to upgrade to a 1st class seat cuz I know me and R. Kelly are doin business!
so I text my boo goodbye, pop an ambien, jump into my plush seat and wake up in the atl 4.5 hours later….
my homey June comes to get me (June is the heartbeat of Skee.Tv) and we chop it up a little bit… we talk about the video girls they just casted, etc etc, the shots and premise of the video…. Gucci Mane coming through(I’m hyped, big gucci fan; I know hella ironic, but I fux with Gucci) so anyways, my fam DJ Skee is producing the video, my boy Kai is directing it, so it’s all fam, I got maddd love in the A from Jermaine to Jeezy to tha Bizness to you name it…. so I’m amped. I get to my telly and it’s very mediocre, but I still ain’t trippin. I’m more worried about whats inside my armored case…. so it’s damn near midnight and me and June find out at the same time that R. KELLY JUST CALLED AND SAID HE HAD AN EMERGENCY AND HAD TO LEAVE TO LONDON? wtf? hold up, my dude DOESN’T FLY…. SO SHIT GOTTA BE SERIOUS. we got the whole production company ready, equipment to film a full day or 2 of video, extra, OJ, celebs waiting, everything, so I’m buggin, but EVERYONE ELSE IS BUGGING! now this shit has nothing to do with R. Kelly’s tour in Africa (which he’s getting a hefty 8 figures for; I’d go back to africa too for that type of cheese) this is just some whole other shit! So I’m heated, I get to my room and THE FUCKING ROOM SERVICE IS DONE FOR THE NIGHT! so I eat some bullshit and just am in a pissy mood. I start calling airlines to figure out how to get back to L.A. cuz I ain’t trynna just hang out for nothing or even grind…. I can’t leave my armored case in the room, I’M BORED AS ALL HELL WATCHING BOOTLEG NON JUDGE JUDY SHIT ON TV AND I’M STILL MAD….. I mean, I can’t just vacay with that on my mind…. so I try to book the 7am flight, but the 2.5 hours that I actually did sleep was enough for me to miss that plane! FUCK! so anyways, I book the 7pm flight and only had to come out $200 for the ticket home…. I hit up my asian brethren Will and T who own Strivers Row and T comes through like a champion to pick me up at the telly… We roll around the A for a little bit aimlessly just talkin shit and catchin up…. we then hit up Wish where we had TK’s Supra release event and peep some kicks out. it’s about 91 degrees outside and like 85% humidity, so I’m dying inside 52 seconds of just being outside…… we then walk down to sk8tique so I can say what up to my boy Stevie Williams, Stevie’s out back rollin a blunt(of course) and he’s with some of his DGK homey’s and they spark one(btw, stevie was reppin some Supra Vaider highs

jeaah!) and then me and T shook… I got to the airport and headed home to the city of angels…. THANK YOU T! FOR REAL, THANK YOU WILL, THANK YOU KAI, THANK YOU SKEE, THANK YOU JUNE! 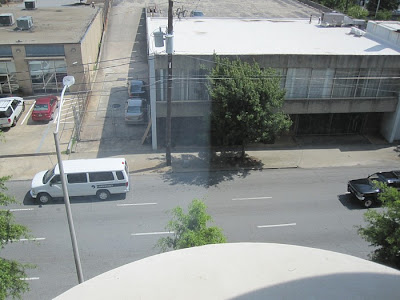 the beautiful view of atlanta from my room 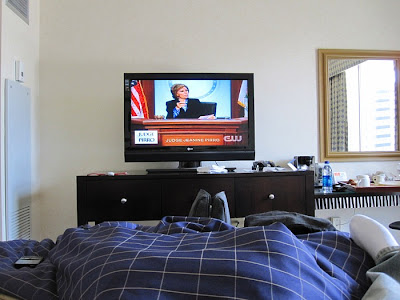 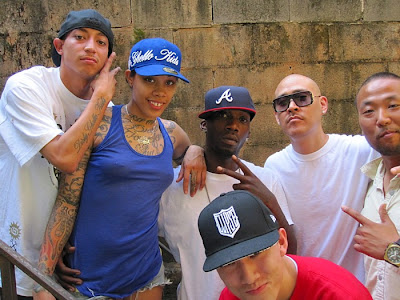 my dude to the left of me since 2002 Stevie Will…. dude to my left of me, an ATL korean G and front and center, my man T aka Snuggles Mcduggal!

aite, y’all…. lemme live for a little bit while I post my last 48 hours in Daygo aka San Diego

p.s. when Kellz gets back from tour, I know I got that work for him…. meanwhile you fucking gay ass jewelers who lurk my blog can eat a fat one…. y’all still throw salt and everything and it don’t work! meanwhile, we’re eating still gettin plump